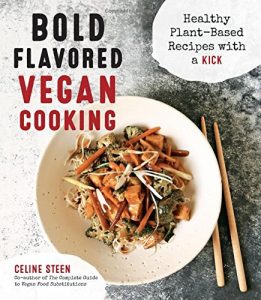 The title says it all but yet there is sooo much more in these pages!

When I was asked to review this cookbook, I had no idea who Celine Steen was so naturally I was pretty curious about her and checked out her blog, cutely named Have Cake Will Travel.  All I gotta say is WOOOOOOOOOOOOW!!!!  Seriously…if you want to see vegan food-porn, go to that page!  Don’t worry, I won’t be offended whatsoever if you stop right here to check it out 😉  And when you look at her intro page, she has been in the vegan cookbook scene for a while but this is her first solo cookbook and let me tell ya, I am beyond excited to share the recipe I am about to share with all of you!!!

So before I get to the recipe, let me give you a better idea of this cookbook…For a busy mom like myself, this is not a cookbook I would suggest for when you come home at 5pm, wondering what you are making for dinner tonight for your hungry family (unless you already made some of the staple items from this cookbook which is very possible!).  However, I do highly suggest this cookbook on those days where you want to impress your non-vegan friends and family…This cookbook definitely has the tools to convert them!   To further explain the cookbook, this isn’t a cookbook “full of spicy food recipes” as my husband assumed when we got this cookbook to review – far from it.  The chapters are broken into four categories: Savory, Spicy, Sweet, and Staples.  The recipes in Bold Flavored Vegan Cooking are pretty unique compared to other vegan cookbooks out there but yet somehow it just works.  I have yet to have a recipe in this cookbook flop on me yet!

When I prepared and served the Citrusy Pepper Chili to my family, it was a home run even with three unsure toddlers!  My husband probably could have lived off of this stuff for the rest of his life and been completely content with that.  The chili was far from spicy, but it was a combination of smoky citrus goodness that was quite memorable.  If you decide to create this recipe, please let me know in the comments section below…I would love to hear from you and see if you enjoyed this recipe as much as my family and I did 🙂 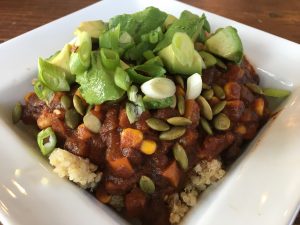 This is a photo of my actual results from creating this fragrant, delicious chili

So without any further delay… 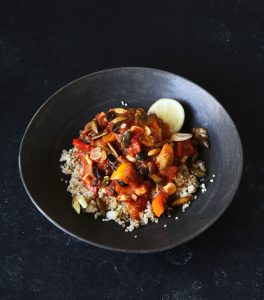 Rest assured that this chili is spicy in the sense that it’s full of flavors and various spices, but it doesn’t pack a punch in the way of heat. Unless you want it to, that is. Feel free to add extra heat sources, such as jalapeño pepper rings upon serving!

Place the tomato sauce, vegetable broth, citrus sauce and roasted bell pepper in a blender. Blend until smooth. Set aside.

Add the corn and beans, as well as the tomato sauce mixture. Bring to a low boil. Lower the heat, and simmer uncovered for 10 minutes or until thickened to taste.

The chili tastes even better reheated the next day. Serve with extra citrus sauce if desired, along with your favorite garnishes, such as roasted pepitas, sliced scallions and avocado cubes. I like to enjoy mine on top of cooked quinoa; it makes for the perfect complete, filling-yet-light summer meal.

This is a zingy, bright sauce that’s just perfect with burritos (page 70), chili (page 116) and salad dressings (page 119). Be sure to use freshly squeezed orange juice because even the “not made from concentrate” kind bought at the store will yield disappointing results.

Combine the orange juice, lime juice, agave, chipotle powder, cumin seeds, garlic, onion and salt in a medium saucepan. Bring to a boil, then reduce the heat to a low-bubbling simmer. Cook down until the sauce is reduced to ¼ of the original volume, with a thickness similar to compote. This will take about 1 hour. Be sure to stir frequently, and adjust the heat as needed.

Set aside to cool before transferring to an airtight jar. Store in the refrigerator for up to 2 weeks.