So here I am on Week 2 of the Engine 2 Diet…I have literally cooked my way through a majority of Rip’s book during this 28 Day Challenge and I find myself in the Pizza area of the recipe section of his book.  Let me just start by venting a little bit…Rip sucks when it comes to providing a pizza crust recipe 🙁  I have all these toppings but nowhere in sight is there any guidance when it comes to making my own “E2 Approved” doughy foundation to support my attempt at an Italian creation.  His only advice is to buy a store bought pizza crust and lists a few brands that he prefers.  I just cannot rationalize spending three bucks on premade cardboard that tries to pass off as pizza crust when I can easily make one at home for literally pennies!  Being the savvy person that I am, I looked online on multiple recipe sites to look for the perfect whole wheat pizza dough.  Now this is where the frustration starts…

Let me first start off by reminding some of you on what the Engine 2 Diet entails.  In brief, it’s no white four, no white sugar, no white pastas/bread/rice, no processed foods, very minimal oil, no meat, and no dairy products.  In addition, for every 200 calories a food product has, it cannot exceed 1.5 grams of fat.  It sounds restricting but it wasn’t until I tried to make a simple cheeseless pizza.  So my discovery took me in two directions…The best reviewed whole wheat pizza crust recipes included a mixture of both white and wheat flour.  Well, that’s not something I can do during my 28 Day Challenge.  Then I found recipes that did not include white flour and the reviews went something like… “The crust was hard as a rock” or “My dog even refused to eat it” or “I have eaten poster board better than this!”.  You get the picture…

So amongst the many roadblocks, one suggestion was to use whole wheat pastry flour.  For starters, that stuff comes in measly 5lb bags (or smaller!) and they are not very cost effective for a simple pizza crust.  Instead, I save that flour for something more special…like brownies. So here I am with a 10lb bag of whole wheat flour and no way to use it for pizza crust.  Upon further sleuthing I found a couple constructive ideas but I discovered that wheat gluten (yep the same stuff they use for seitan!) can be thrown into the wheat flour to make the dough more pliable and thus, resulting in a pizza crust that doesn’t give you the sensation of eating glass…So in my mission to spare anyone the grief that I went through to get to this point.  I am providing you the VERY first recipe in this blog.  I’ll admit, this is not New York pizza by a long shot and could use a but of tweaking, but for a pizza crust that would make Rip Esselstyn proud, this will definitely do the trick.  I also provided poorly done photos that I took with my iPhone 4, just so everyone gets an idea of the step by step process.

So without any further delay….

Robin’s E2 Approved Pizza Crust
Ingredients:
1 cup lukewarm water
1 Tablespoon of raw Turbinado sugar  (Sugar in the Raw)
1 envelope of yeast (not fast rising!)
1 1/2 cups whole wheat flour
1 Tablespoon wheat gluten
1 teaspoon fine sea salt (if using table salt, you might want to cut the amount in half)
Directions:
Mix the sugar with lukewarm water until somewhat dissolved.  Add yeast and mix.  Wait 10 minutes.  During this time the yeast will “proof” and once those 10 minutes are up, you should notice a bit of foam on top on the mixture.  If there is no foam, your yeast is probably dead (or expired) and you will have to repeat again.  This is vital!!!  In a large bowl, combine the wheat flour, wheat gluten, and sea salt.  Then add proofed yeast mixture to dry ingredients.  I prefer mixing with your hands because your hands can give you a better idea on whether or not your dough is too wet or dry.  The dough should feel somewhat grainy but have a little (not like regular pizza dough so don’t get too picky here!) stretch to the dough (probably due to the added wheat gluten).  Once thoroughly mixed, your dough should look something like this: 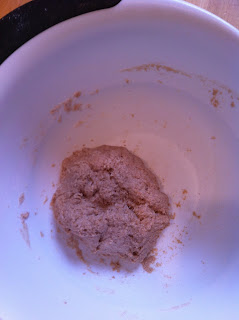 Place a wet towel over your bowl with the dough and let sit for an hour until the dough has doubled, which should look something like this:
Once the dough has risen, you will want to stretch/roll/press (whatever suits your fancy!) the dough into a standard size pizza pan (not the jumbo one!).  Let the dough rest in the pan for 10 minutes.  This will allow the dough to rise slightly again which is what we are looking for.  From there, you want to add your sauce, toppings, and any herbs you might want to use.  I used low sodium crushed tomatoes as my sauce and topped with peppers, onions, artichoke hearts, and pitted kalamata olives.  As far as herbs go, I used dried basil, oregano, garlic powder, red pepper flake, and freshly ground pepper and I baked the pizza at 425°F for roughly 15 minutes (check the crust every 5 minutes or so to prevent the potential of burning!). 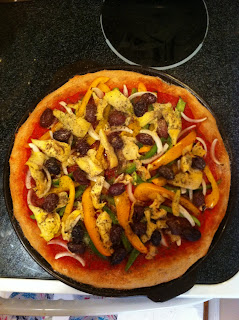 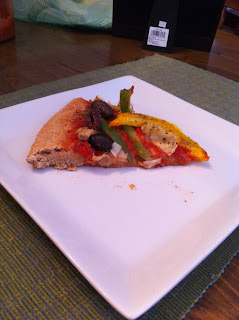 So there you have it…my first official recipe.  I never thought it would be something as simple as pizza crust but this was a desperate time and I figured that there were others who were in the same rut.  I would love to get feedback on this recipe along with any modifications you made because this recipe probably could use a few in order to turn it into perfection.  I’m definitely open to suggestions and a great place to start is putting in the “Comments” section below….